Full Version: Alienware Giveaway : Klingons!
You're currently viewing a stripped down version of our content. View the full version with proper formatting.
https://eu.alienwarearena.com/ucf/show/2149405/boards/contest-and-giveaways-global/Giveaway/star-trek-online-pack-giveaway
Thank you for posting, as I hadn't seen that.

Still a good number of keys out there, and I was able to enter it ingame without and problems!

If you don't have ARC installed you can still claim your code, go here:
https://www.arcgames.com/en/redeem/

(I used the above website, and received an error after putting in the code, like a page couldn't be found, but then in game I was able to claim the items so I guess everything worked fine, except for where the webpage wanted to go after the successful redemption.....)
Much the same as the other one :
https://game.intel.com/giveaways/star-tr...e-giveaway 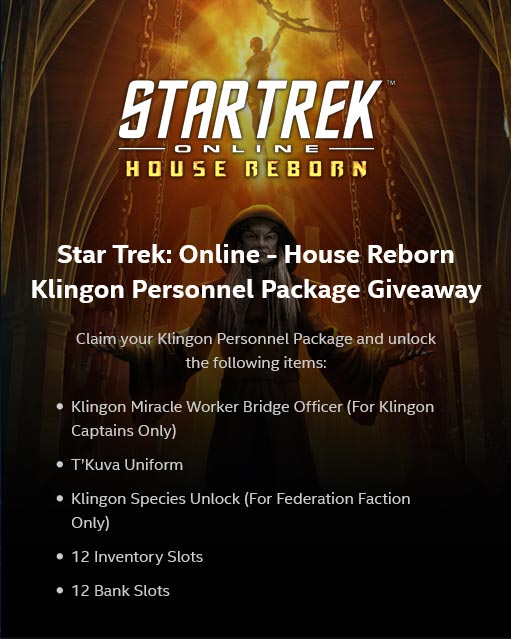 Star Trek Online Alliance Reborn MatHa Bundle | Alienware Arena
What's included:  Page says "*Ship is unlocked for the account and is Klingon Faction only."
Not quite, since everyone can fly everything now, my Federation Romulan is now taking her new MatHa for a test flight...

(Also, once it's claimed from the promo tab by a character, all other characters on that account can claim it for free from the Shipyard, not the promo tab)
Another one :
Klingon Personnel Package
⦁ Klingon Miracle Worker Bridge Officer
⦁ T’Kuvma Uniform (from Star Trek: Discovery)
⦁ Klingon Species Unlock (allows Starfleet officers to create Klingon Captains)
⦁ 12 Inventory Slots
⦁ 12 Bank Slots
Star Trek Online Klingon Personnel Pack Key Giveaway - MMO Bomb
Star Trek Online: Free Terran Incursion Pack
(Note : This is for the Epic-launched STO only. AFAIK, it can't be linked to an Arc account)