Full Version: I have been rude. Or have I?
You're currently viewing a stripped down version of our content. View the full version with proper formatting.
Hello everyone,

so I have been expelled from the fleet, but have been given permission to continue to use the forums and the publicly available services.

One of the three reasons for the expulsion was "We've received reports that members have asked for help, especially in fleet related matters, and you've been rude rather than help guide them."
Personally, I am not aware of one single instance in which this happened. However, I'd like to stand corrected and if justified, I'd like to apologize.
So, I'd appreciate it, if the victims of my "rudeness" could pm me and tell me about my misdeeds towards them.

TP
So a week has past and none of the supposed victims of my "rudeness" have contacted me. That only confirms my suspicions.

Down below I will present the three points (screenshot of official notification), that led to the kick and I will comment them directly. Make of them what you want.


All this happened without one single warning. So in that light, all this rather feels to me like this: 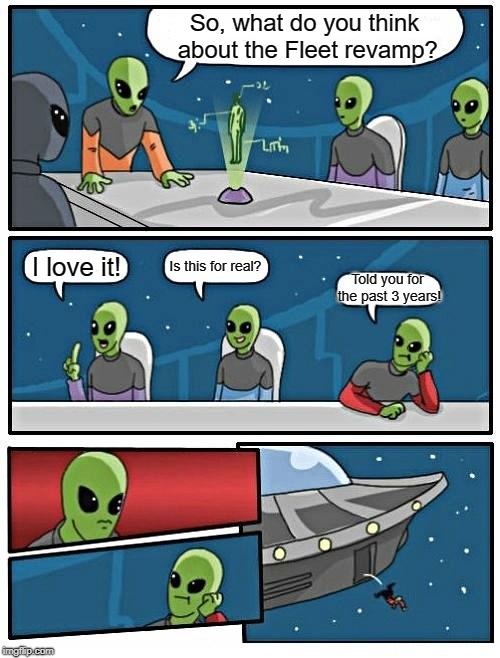 Again, make of all this what you want.
I bid you all farewell, this time apparently for good.
If you want to keep in touch, you know how to reach me.

Well since you have decided to make this private matter public it is only fair that I provide the Admiralty's side of this as well. In response to your points above.

1. The fact that no one has contacted you only proves that not many fleet members come on the forum. This is something you've had an issue with in the past. Especially now that we don't have forums tied to rank and awards, new members have less of a reason to come here. A small sample is hardly representative of a whole, especially when that whole may include members that are no longer part of the fleet or even part of the game.

2. There is discussion and useful criticism. There is consistent over-the-top negativity that creates a toxic environment. Two very different things. Also, as I pointed out to you when you asked me about this, you've used extremely negative and insulting words publicly on the forum such as "I will no longer waste my time with you" which can be found in https://forum.stoacademy.com/showthread.php?tid=5499. That's not in the spirit of what this fleet is about and is the perfect example of being rude to members.

As for the claim that this revamp is mostly your idea, how dare you take the credit for the culmination of 9 years of experiences, ideas, and hard work of many people. I sat and wrote a detailed 15 page revamp document to present to the Admiralty for both long-term and short-term ideas. The document the fleet saw is only a fraction of that. It is based on many different ideas from many different people, and yes that list of people includes you. To claim that you single-handedly are responsible for the revamp is arrogant.

3. You have said yourself that we are stubborn and you're frustrated with us. If that's the case, then why stay around? Frankly, I see it as a difference in values. You value certain things over others that don't fit well with our culture. There's nothing wrong with that. Sometimes those differences are too great and the parties involved need to part ways. It's a way of life, and this is one of those times.

As I said to you before, I can't force you to believe anything. When all is said and done its up to each person to make up their own minds. You have every right to your opinions and to think what you want about this decision. Simply put, removing someone from the fleet is always regrettable and is never done without careful discussion and review. The Admiralty has a duty to all our members and their well-being. We make out decisions based on that duty.
Thank you for doing the obvious and re-linking thread 5499. I had that linked already and admítted to have used harsh words in that thread to make it a wake up call.

I particularly love how you completely avoid the fact that I received no previous warning from any Admiral before being expelled. Therefore, I still call them pretenced BS to get rid of me.

Regarding the fleet revamp, when I first read the draft, I was like "Are you fucking kidding me?". I've been telling you for years that members should be promoted only, if they are actively subscribed to the channel and that promotions should be also based on team activities. And surprise, the revamp is pretty much just that. As I wrote in my post, I have been nagging you about that for years. So yeah, I do dare to claim credit for that!

Your actions and inactions have driven a lot of good people away from STOA in the past, because you wouldn't listen to the needs of the fleet. Now you got rid of the last one of them.

I particularly love how you completely avoid the fact that I received no previous warning from any Admiral before being expelled. Therefore, I still call them pretenced BS to get rid of me.

You're right about the warning. However the fact of the matter is, even if you take #1 away, the other two alone are still enough to warrant removal from the fleet.

(04-20-2019, 08:45 AM)parakema Wrote: [ -> ]Regarding the fleet revamp, when I first read the draft, I was like "Are you fucking kidding me?". I've been telling you for years that members should be promoted only, if they are actively subscribed to the channel and that promotions should be also based on team activities. And surprise, the revamp is pretty much just that. As I wrote in my post, I have been nagging you about that for years. So yeah, I do dare to claim credit for that!

You claim just one thing out of the entire revamp? If your takeaway from the revamp is only that one promotion requirement then my assessment was correct. Your values are not in line with that of STOA's mission statement. The revamp was designed with the goal of improving relations between members and achieving that mission statement. A single rank requirement does not accomplish that. So no, the entire revamp was not your idea. A small portion of it was. Just like other people contributed small portions to it as well. That's called teamwork.

You ask for examples of rudeness and here is another one. You are not the last good member and to say you are is an insult to all members of STOA. We have many good people in this fleet. People who are actively engaging and helping members all the time. We have new members who I see join and an impressed by them within a few days and certainly see potential. You are not the last good member. We have many and I thank them all for their efforts in making STOA a fun community.

If I may make a suggestion. Start your own fleet. You have been playing STOA and been a member of STOA for a long time. You know the ins and outs. Yes it is hard work and time consuming, but I think you'd prefer being the leader rather than the follower. You can make your decisions rather than go along with someone else's. If nothing else, consider it a personal challenge for yourself.
Hello TP,

I just wanted to share something with you. It has nothing to do with whats going on here. It's simply between you and I.

"I reached the pinnacle of success in the business world. In some others' eyes, my life is the epitome of success. However, aside from work, I have little joy. In the end, my wealth is only a fact of life that I am accustomed to. At this moment, lying on my bed and recalling my life, I realize that all the recognition and wealth I took so much pride in have paled and become meaningless in the face of my death.

You can employ someone to drive the car for you, make money for you but you cannot have someone bear your sickeness for you. Material things lost can be found or replaced. But there is one thing that can never be found when it's lost - Life. Whichever stage in life you are in right now, with time, you will face the day when the curtain comes down.

Treasure love for your family, love for your spouse, love for your friends. Treat yourself well and cherish others. As we grow older, and hopefully wiser, we realize that $300 or a $30 watch both tell the same time. You will realize that your true inner happiness does not come from the material things of this world. Whether you fly first class or economy, if the plane goes down - you go down with it.

Therefore, I hope you realize when you have mates, buddies and old friends, brothers and sisters, who you chat with, laugh with, talk with, have sing songs with, talk about north-south-east-west or heaven and earth, that is true happiness! DON'T EDUCATE YOUR CHILDREN TO BE RICH. EDUCATE THEM TO BE HAPPY. SO WHEN THEY GROW UP THEY WILL KNOW THE VALUE OF THINGS AND NOT THE PRICE!  Eat your food as your medicine, otherwise you have to eat your medicine as your food.

The one who loves you will never leave you for another because, even if there are 100 reasons to give up, he or she will find a reason to hold on. There is a big difference between a human being and being human. Only a few really understand it. YOU ARE LOVED WHEN YOU ARE BORN. YOU WILL BE LOVED WHEN YOU DIE. In between you have to manage.

The six best doctors in the world are sunlight, rest, exercise, diet, self-confidence and FRIENDS. Maintain them in all stages and enjoy a healthy life."
- Steve Jobs Final Essay


I read what you said about being the last good member of the fleet and was really moved. To know that you thought so low of me. Attilio is a member is he not? James is a member is he not? All brilliant men. We always heard you out. You're smart, funny, and were valued. In any case Admiral, yes, Admiral, as I didn't think any less of you, not as a Commodore, or a Captain as you requested to be. What was that about anyway? I guess I'll never know. I'd like you to hear a song as I bid you farewell old friend.

Primavera means Spring as in the season. May the wind be always in your favor Admiral... *Salute*