Full Version: Steamrunner class on steam
You're currently viewing a stripped down version of our content. View the full version with proper formatting.
http://store.steampowered.com/app/9908/

this is the a ship that was in star trek first contact. 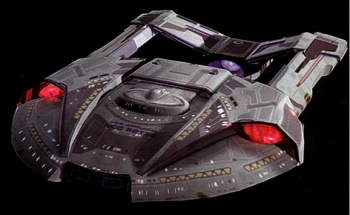 
the 2 ships come with a Resonance Cascade Modulator universal console.
This Console can be equipped in any console slot on any ship.
You may only equip one of these console on any single ship

heres what the console actually does

Steam powered captains, we have the pack for you! This bundle contains all you need to start battling the Klingon Empire, including two Starfleet Steamrunner starships -- a Tier 1 ship for the start of your career, and a Tier 5 ship for when you reach Vice Admiral.

Note: This pack unlocks the following items for every Federation character on an account. If you delete a Steamrunner starship, you must reclaim it from the ship store. You must be at least level 2 to open this pack.

The Blockade Runner Escort: Steamrunner class has been around since the late 24th century, but due to its reliability and effectiveness is still in limited use today. The Steamrunner class saw significant action in the Battle of Sector 001 against the Borg, as well as in countless battles and sorties during the Dominion War. Simply put, the Steamrunner is fast, agile and tough.

The Blockade Runner Escort: Steamrunner class comes equipped with a Resonance Cascade Modulator console mod. This mod gives you the Team Fortress power which you can use to enhance your team's shields for a limited duration, eliminating bleedthrough from normal attacks and decreasing damage sustained by the team's shields. This Console Mod can be equipped in any console slot on any ship. You may only equip one of these mods on any single ship.
■ Hull Strength: 11,000
■ Shield Modifier: 1
■ Crew: 200
■ Weapons: 2 Fore, 1 Aft
■ Device Slots: 2
■Bridge Officer Stations: 2 Ensign Tactical, 1 Ensign Engineering, 1 Ensign Science
■ Console Modifications: 2 Tactical, 1 Engineering, 1 Science
■ Base Turn Rate: 16 degrees per second
■ Impulse Modifier: 0.21
■ +10 Power to Weapons
■ Resonance Cascade Modulator
■ Can Load Cannons

An upgrade of the sturdy and effective Steamrunner class, the Blockade Runner Escort Retrofit: Steamrunner class has been upgraded to the highest standard and has increased Hull Hit Points, Shield Strength and an additional Console slot. It will be waiting for you when you reach Vice Admiral.
■ Hull Strength: 34,500
■ Shield Modifier: 1
■ Crew: 200
■ Weapons: 4 Fore, 3 Aft
■ Device Slots: 2
■ Bridge Officer Stations: 1 Lieutenant Commander Tactical, 1 Commander Tactical, 2 Lieutenant Engineering, 1 Ensign Science
■ Console Modifications: 4 Tactical, 4 Engineering, 2 Science
■ Base Turn Rate: 16 degrees per second
■ Impulse Modifier: 0.21
■ +15 Power to Weapons
■ Can equip the Resonance Cascade Modulator
■ Can Load Cannons
To redeem your Starter Pack after purchase:
1.Visit StarTrekOnline.com/Splash
2.Create a free account. Already have one? Please log in.
3.Once logged in, click the “My Account” link at the top of the Star Trek Online homepage.
4.Once in your “My Account” portal, click the “Redeem Key” link.
5.Enter the key in the field and click ‘Submit’.
6.If you have not done so already, download the game at StarTrekOnline.com/Download, install and log in.
7.You can claim your promotional items through the in-game C-Store, under the ‘Bundles’ tab

I think its worth the money