Full Version: Anniversary Event Tips & Tricks
You're currently viewing a stripped down version of our content. View the full version with proper formatting.
Just wanted to post up some tips and tricks i know of to help make your Anniversary Event grinding a bit less hectic and understood a little better.

globally speaking, first set all your Graphics settings using the bars to minimum. it may not be a pretty as intended, but you want to win, don't you?

If you're one of the many users that doesn't like doing the Prize Patrol mission because of all the default NPC students walking through the presents game, here's some things you can do to make it better:

1: "Don't stand so close to me"
With your graphics minimized, using your camera POV at more than 10m from the present boxes will cause them to "cave in" at the bottom, making it possible to see Minion Q's feet poking through the polygons. You get 1 minute to figure out where he is before the game expires. Doing this should allow you to get it done in a few seconds. 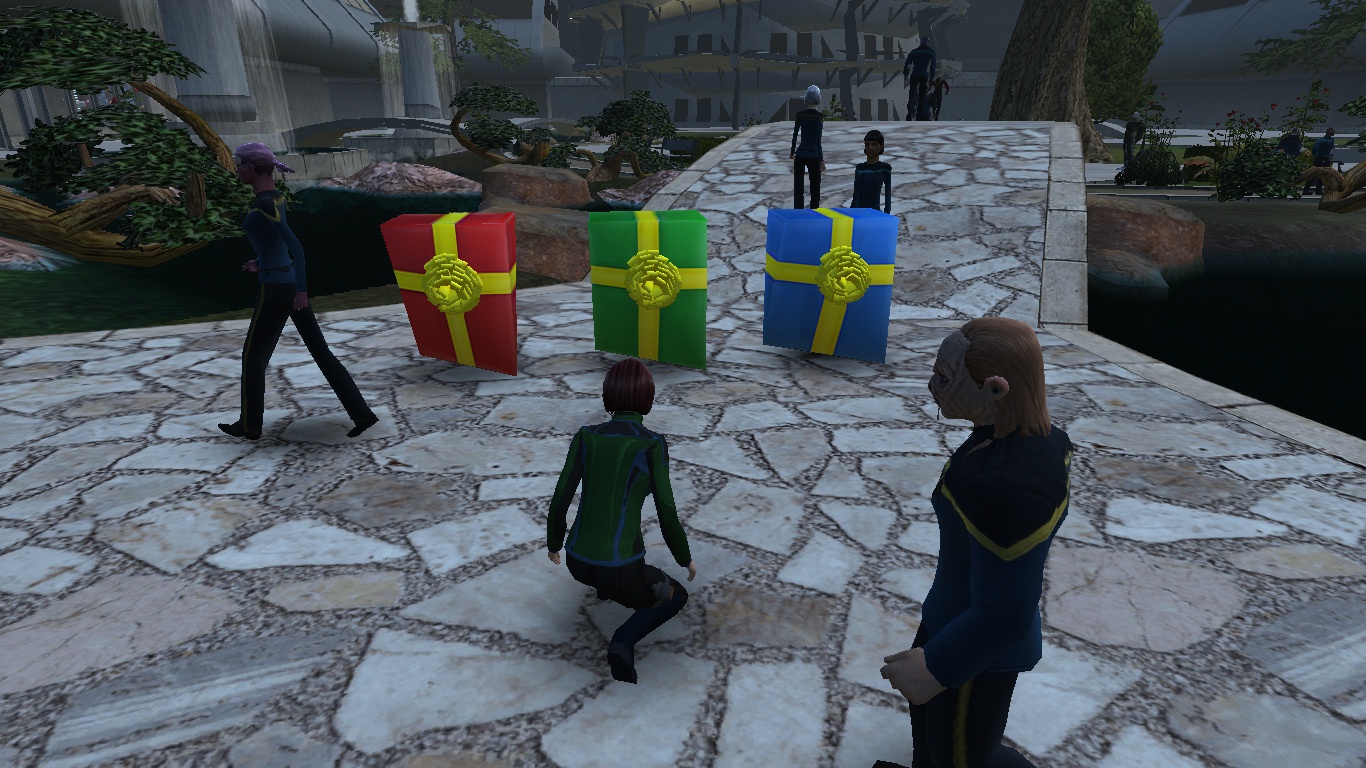 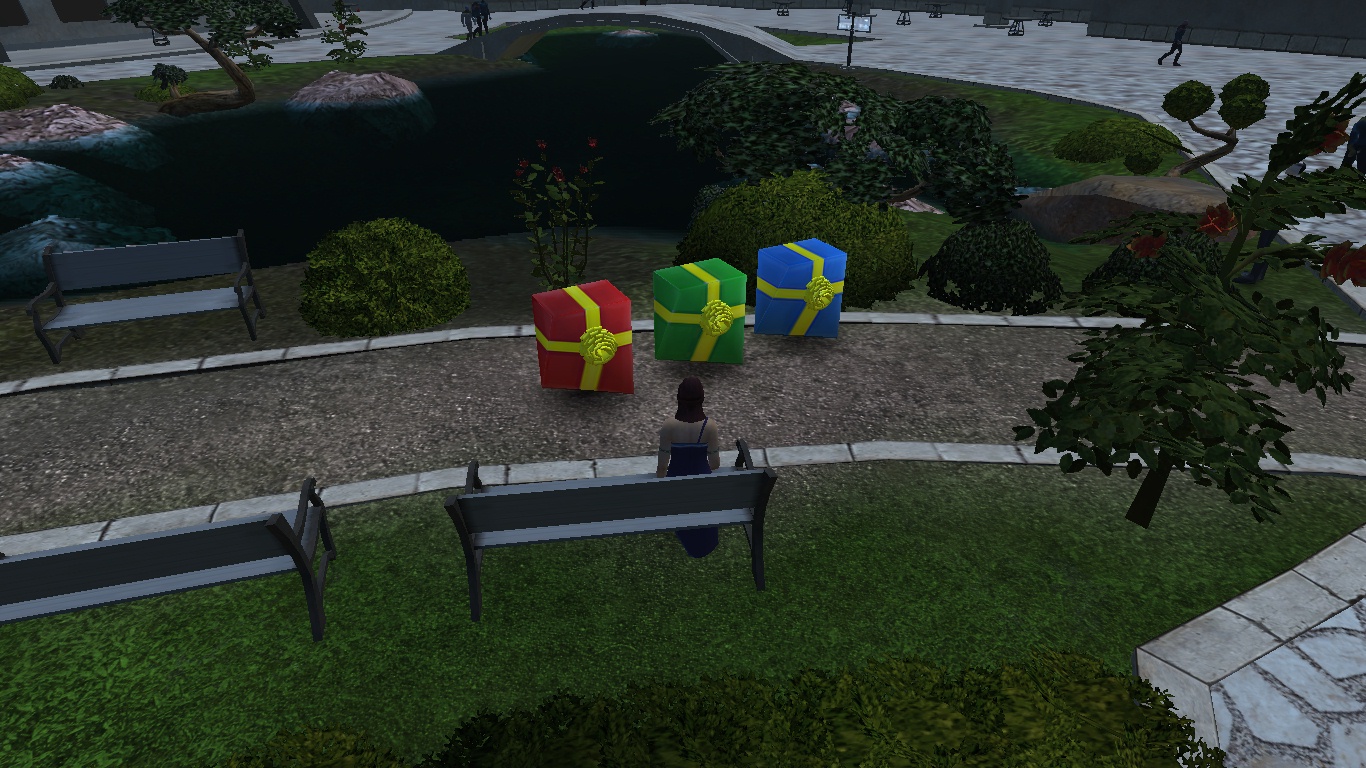 2: "Me and my shadow"
Even close up you can still find clues as to where Minion Q is. Look for his shadow making the present he's in slightly darker than the other two. 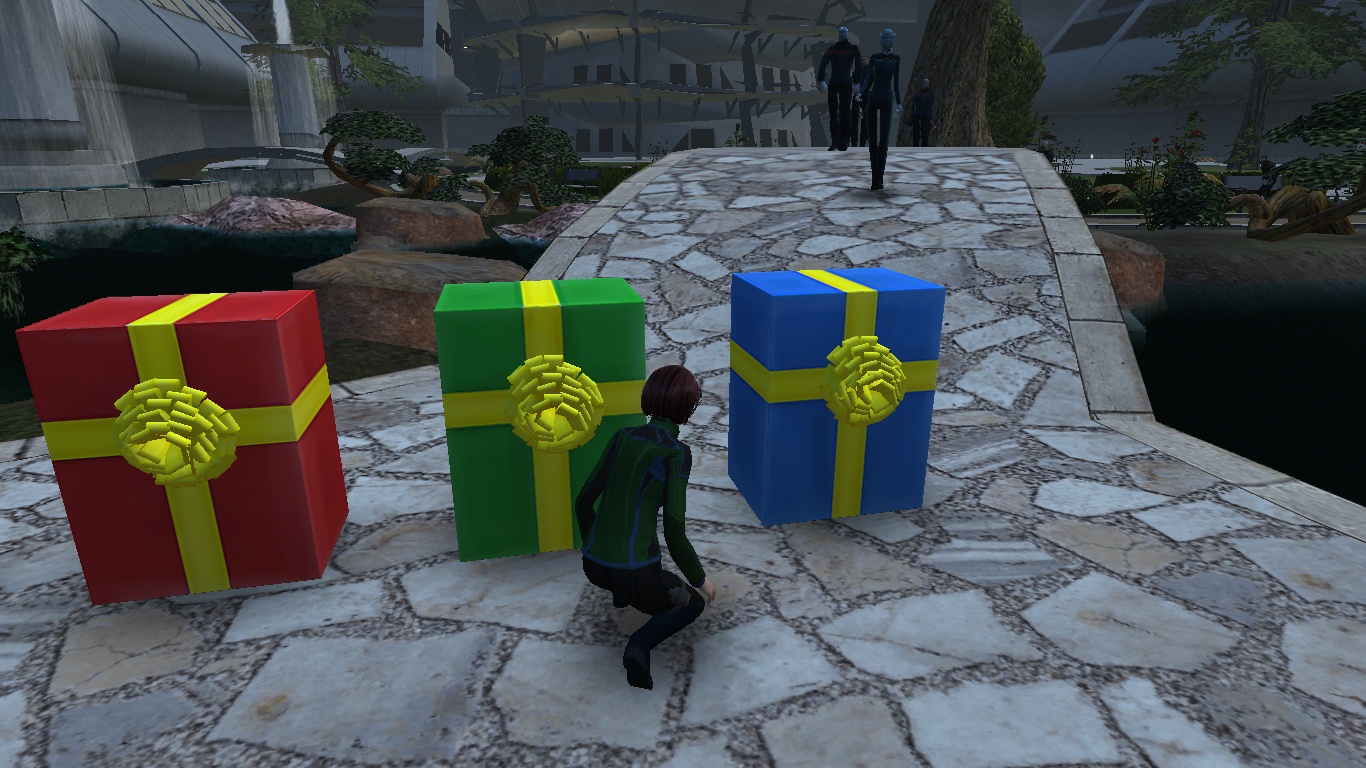 3: Look Inside
even regardless of your graphics, you can also use your camera POV to be sure what is inside each present. I like to stand a few meters away from the middle present and use croutch to do this 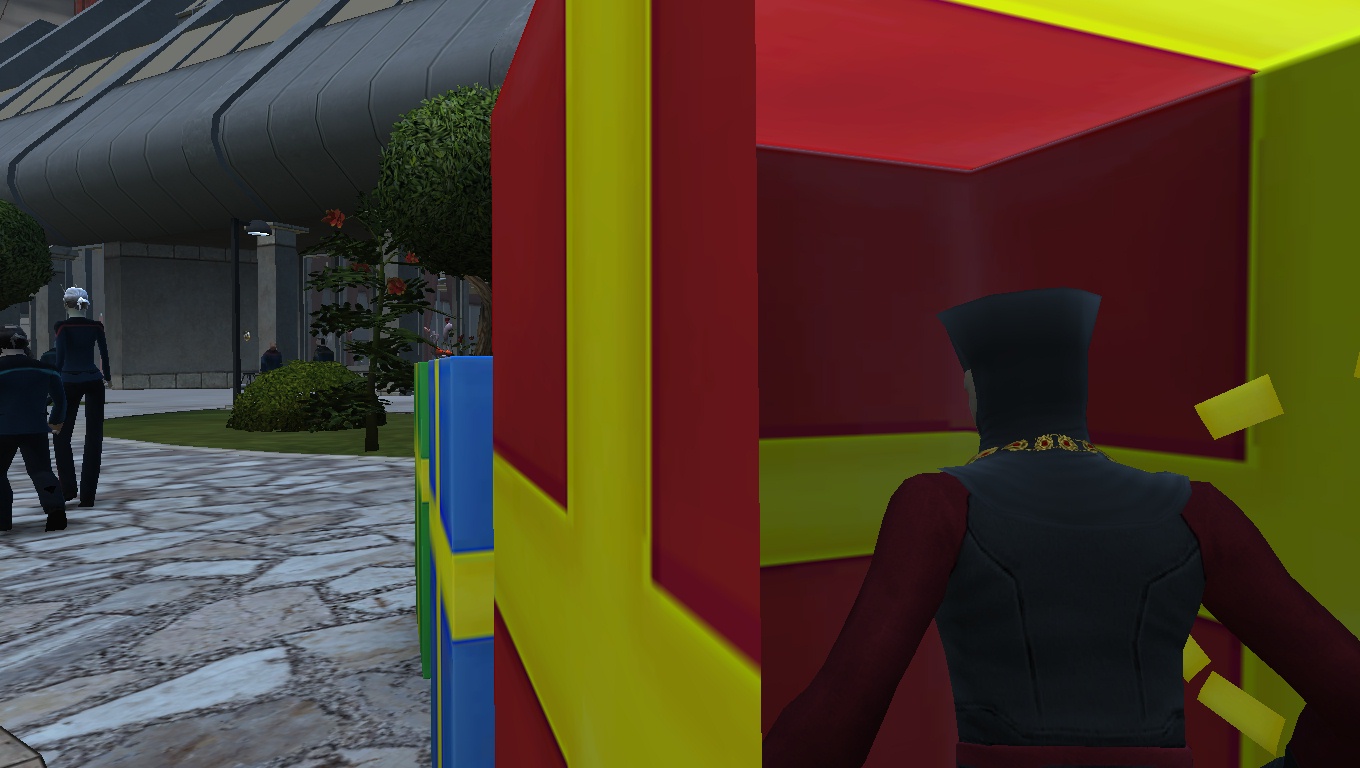 Also, if you get the running game instead, the best places for that are the bridges, next to the buildings and on top of the emblem, since they will often get stuck against walls, rocks, and tree trunks well before their timer runs out.


For Omega Molecule Stabilization Mini-Game:
The BEST spots for a full day of farming/grinding each color are at:
Red - Dilithium Mine Ground
Yellow - Drozana Space
Blue - Vulcan Space, (with Wolf 359 a close 2nd)

The jumpiness that a lot of players get fed up with is caused by a few things, such as volume of players online (server lag) and your own system working against you (maxed out CPU/GPU from memory leaks and/or typical systems)
I can get around that by doing these additional steps:

1: eliminate the audio and visual distractions that can interrupt your game:
You can eek out a little more performance from the minimized graphics and be able to focus better at the same time by changing some audio and visual settings. You can make sure the molecules aren't going to shake your screen under the advanced tab.

Mute the FX, Music, (amb)Ambient, and (NPC)Voice volumes on your Audio tab in settings, so those pesky scan noises(fx), clanky equipment(amb), space beacon(amb), players warping in and out(fx) and that damn Drozana Ferengi automatically popping up every 10 minutes(NPC) to yell "WELCOME TO DROZANA!" are taken out of the soundcard mixer processing of your games.  (that ferengi will still pop up regardless >.< that's when i yell back "FIRE EVERYTHING"

) You can also raise or maximize the Interface volume to hear the minigame beeps for better timing.

You can also Change your UI Scale to make your minigame not so mini anymore on the Basics tab in Options. I scale mine up to anywhere between 1.3x and 1.5x, allowing me to use a better range of mouse movement. you should also consider hiding the UI elements that you won't need. 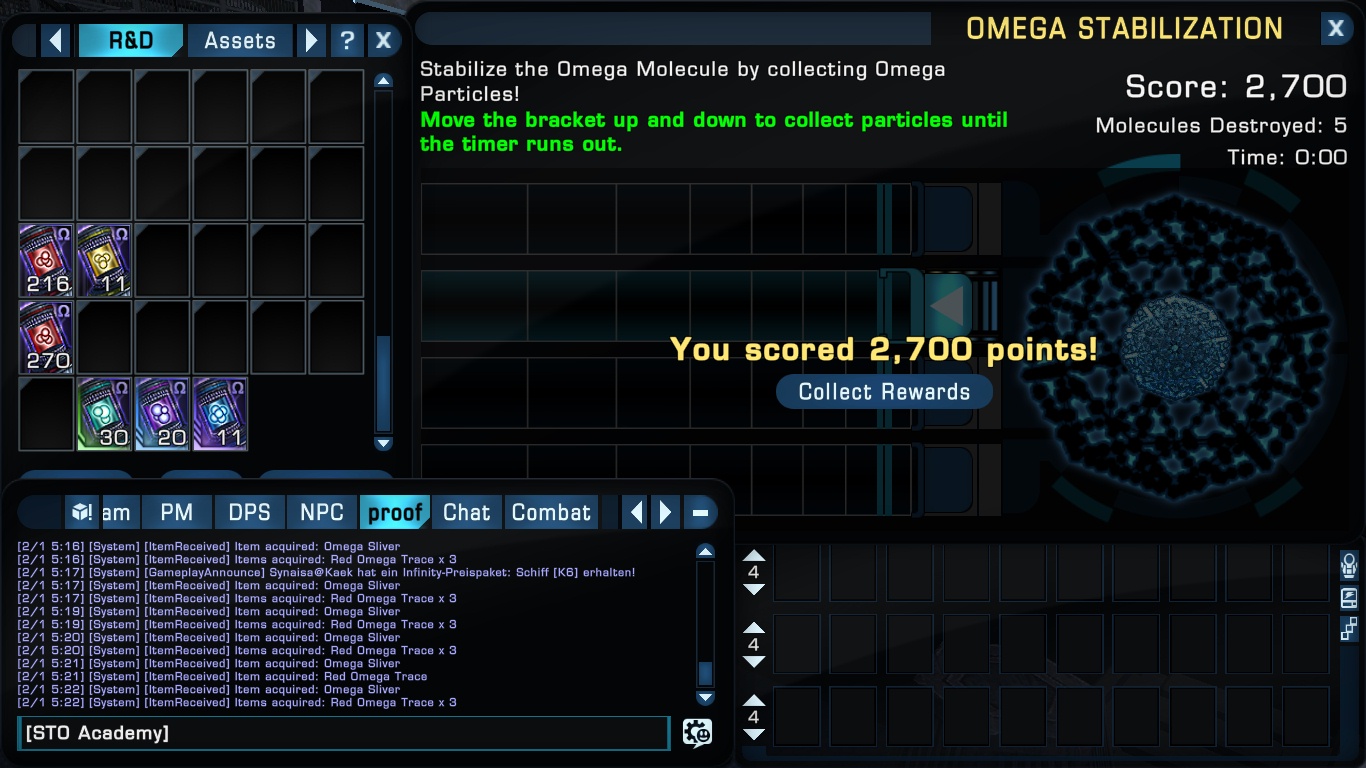 2: find a place away from the Player spawn points and the crowd.
I have noticed that a majority of the instance's players will all huddle up like moths to a flame to the closest molecule from the instance spawn point. This is the primary reason why some games will suddenly stutter and jump since cryptic is insistent on shoving us into full instances with multiple users calling for the same mini-game at once. 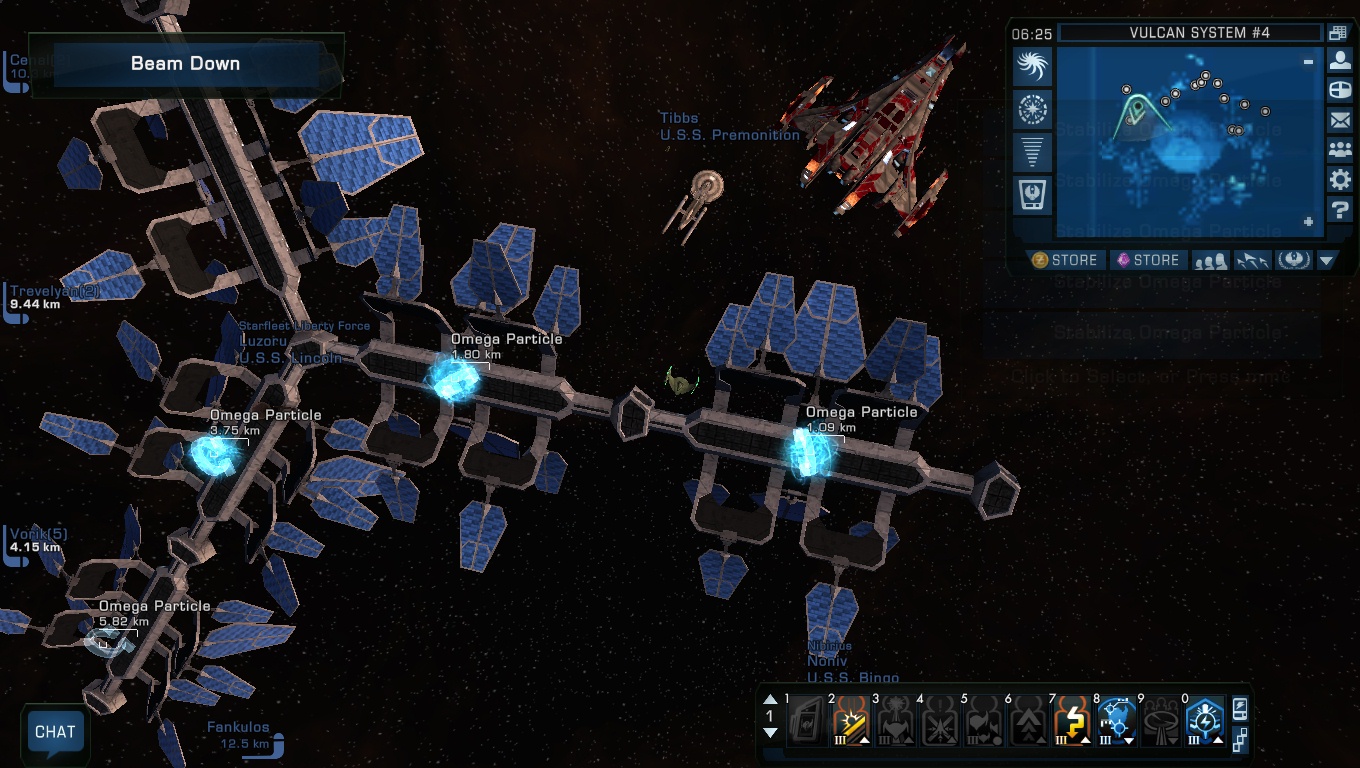 3: try to call for the game at the bottom of your list.
In every pve we play there's always a need/greed/pass list of pick-up gear. If you've ever noticed it in the many videos online, the older nodes are always on the top of the list. That is the reason why your game may suddenly quit on you before your allotted 0:50 seconds - because the node spawn timer expired.

5: Make good use of your Alts for farming. I like to position each alt in a different spot, and farm just one color for the whole day.  That way i'm only doing the daily run around on my primary toon. This is also the perfect time to level up your doff schools and admiralty, as well as convert your previous day's slivers, shards and fragments into upgrades while you farm.

I suggest using the craft time first for all the bonus slivers to shards, then to fragments, then to upgrades before converting your traces so you have the upgrades (which each take 20 hours to craft) for the bonus TP weekends during the Anniversary event... Even if you don't have too many upgrades, there will still be more upgrade weekends every 2 to 3 months. It should also be kept in mind that the upgrade weekends are best for low mark items, since they only boost your tech points and not your quality improvement chance. Any leftovers you have by the time the Risian Lohlunat Festival gets here you can sell for a few million each... which reminds me, I should sell some of my Favors now too!

Somebody had some free time to kill!
Excellent guide!
On the rare occasions I do the prize patrol mission, I tend to change the camera angle so I'm looking down at the boxes from above. This way I can see which box the little Q is running into. Might not work for some, but it does for me. Just wanted to pass that along.