Full Version: Funny AoY game bugs
You're currently viewing a stripped down version of our content. View the full version with proper formatting.
Pages: 1 2
So Agents of Yesterday is out and we are all busy looking to get probed and of course along the way we find bugs. I have not gotten very far just yet with my Secret Agent Man but I found this bug and decided to share. Spoilers for anyone that hasn't played the Fed story line past the Kilngon War.

Near the end of the mission Past Imperfect you fight the 23c version of B'Vat, who is still affected by the Augment Virus. However, the sprite that I actually did battle with was a grey-haired human female. After the smack-down and the dialog opens, it is the Klingon version shown. I have no idea how this happened.

Anyone else see/experience a funny bug?

P.S. I tried to add a screenshot but I kept getting this message

You don't have permission to access /newthread.php on this server.
"The ladies' room? Certainly ma'am, it's over there..." 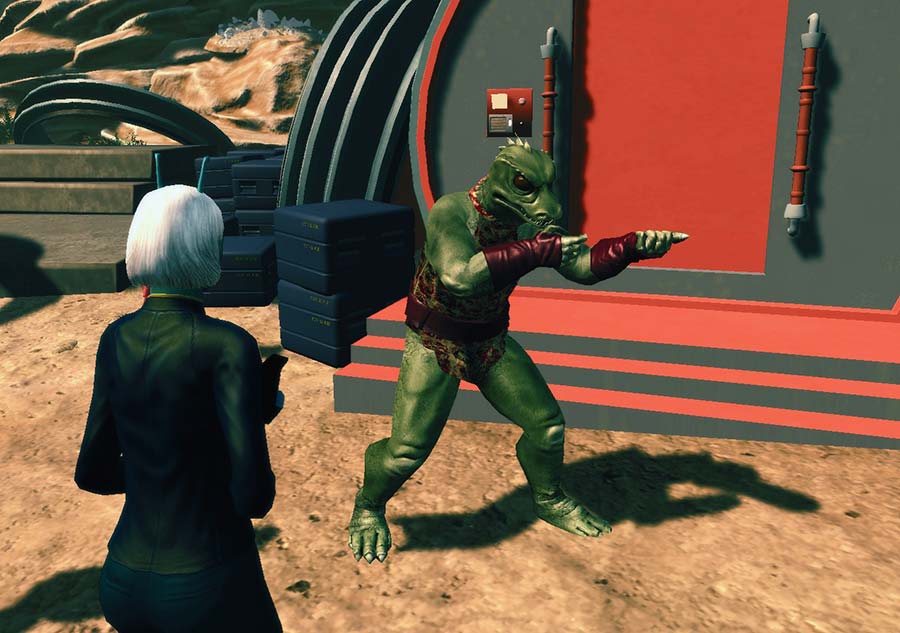 (Some corpses take a while to disappear or even to fall over. Gorns are stubborn)
Not a bug, but more of an oversight:
When you reach Level 10 and enter 25th Century Earth Spacedock for the first time the system awards you by saying, "You are now a Delta Recruit."  You would assume Cryptic would at least include a voice-over of someone saying the words, "Temporal Recruit"...

Yes alot of the dead don't seem to know they need to fall over or disappear. That is one of the main things i have noticed. I think I did see something that said delta recruit but i am not sure where it was.
I've been seeing the "Freezing Dead" too. but also seen some take a special power shot to the chest at point blank with knockback only to get back up just to do the die animation... lol its like a bad western... Guess I'll have to double tap!

Also, it seems that AOY glitches are at Risa too, floaters lost their jetty sounds and FX...
and earlier today i had to stop hunting cause when i deactivated my floater, i kept "floating" but walking/running at 2x speed and without vertical physics lol
Whilst doing Night of the Comet after killing the NPC's in one room they all got up and ran out the room zombie like and promptly fell down again in the corridor, I was so busy laughing I didn't get chance for a screenshot

Also every time I visit Drozana now with the new voice over I can't help but be reminded of this:

or better still for the South Park fans this:

https://www.youtube.com/watch?v=ExeDu7cC-vE
This is not funny, but rather damn inappropriate:
[attachment=2114]
When my AOY character hit level 20 Admiral Quinn called and reminded me what a great Klingon Warrior I am. He also invited me to Qo'noS for tea.

It could have been an undine though. His voice sounded different.

It could have been an undine though. His voice sounded different.

That happened to me too! I think you may be onto something with the Undine!

Indeed, such is the lament of the TOS era... i wish the skirts had an option for a more appropriate length instead of just mini.. the guys may think it's ok, but we (female gamers) know better... T'Met would say "I'm a Doctor, not a showgirl."
Pages: 1 2